Lee’s Jade City and Jade War begin a family saga in which magic and loyalty are more treasured than life itself. In the sprawling, metropolitan capital of an island nation, family-run clans teeter on the edge of deadly conflict as the world seeks covert control of their cultural and magical wellspring: jade that offers the right bearers impossible physical power. A synthetic drug offers the addictive, dangerous power to anyone and the itch for jade begins to spread. 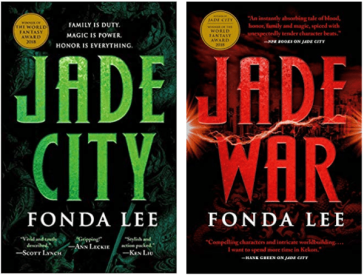 With the echoes of Kekon’s civil war dying with its elders, the nation’s younger generations are coming into power, and the No Peak Clan’s scions are no more ready for that burden than any of history’s princelings. Kaul Lanshinwan may have been raised as his grandfather’s successor, but rising to fill the shoes his late, larger-than-life, war-hero father left empty has already cost him dearly. His brother, Hiloshudon, on the other hand, may be too ready to be his brother’s right-hand-man, the clan’s street-enforcer. Together, they seem strong enough to face anything—except maybe all-out war with their rival clan over black-market jade sales and territorial encroachment. For that, they’ll need family. Long removed from clan business is their sister, Shaelinsan, who will not wear jade. The Kauls’ younger, adopted cousin, Emery Anden, cannot wear jade until he graduates. And for the Kauls, everything is written in terms of jade. Those that wear it can be powerful and vulnerable as corporeal gods. Those who cannot—or who choose not to—walk a tenuous line beside them. But the price of that jade will always be blood.

Calling the Green Bone Saga books “The Godfather with magic and kung fu” (as Lee has previously) is as succinct a summary as can be made, but talking only about how much fun these books are misses the craft that underpins them. The fight scenes are tense, physical, but don’t go over the head of someone without a strong awareness of martial arts. The characters’ competence hamstrings them as often as it helps, and their motivations are clear, personal, palpable. The twists are as gut-wrenching as the violent decisions the characters make to gain or maintain power. And the momentum carries straight through both books, and I rarely find book twos to be as strong as their companions. The family ties and addictive, consuming magic remind me of Melanie Rawn’s Dragon Prince series, another sweeping epic albeit one with a far different setting. Combining the force of epic fantasy with familiar, urban set dressings and the gritty feel of a mob story just hit all the right notes for me. The sum of this: Lee sets the bar high for herself and others. Jade City and Jade War are page-turners that do not let up, and I expect nothing less of Jade Legacy when it arrives.

On a personal note: I do know Fonda, but happily purchased both books on my own with no incentive from Fonda or her publisher. I also listened to these books on Audible and very much enjoyed Andrew Kishino’s performance.